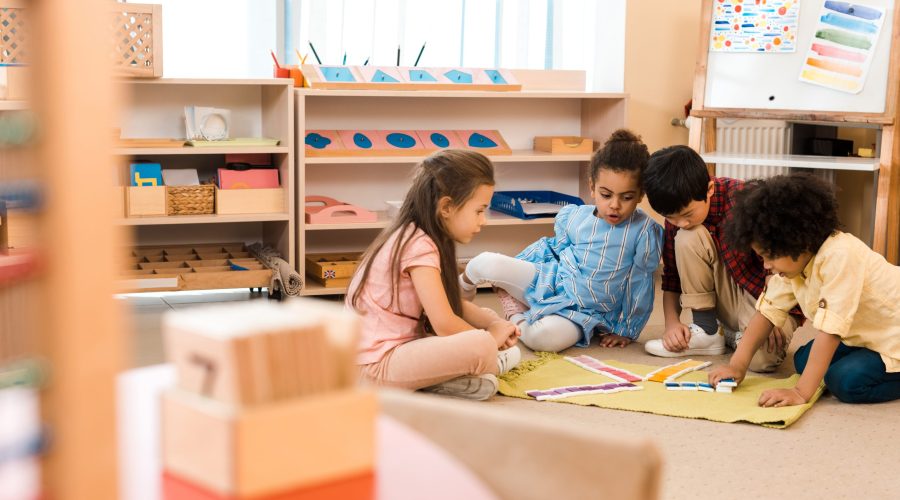 How Montessori Education Fosters Intrinsic Motivation in the Classroom

Imagine a classroom where one child is carefully walking to a table, carrying a tray with two wobbling glass pitchers. Their tongue is sticking out, and their eyes are refusing to blink, fixated on the tray. Another child walks past and drops their pencil to the floor. Another child strikes a bell to match the notes, while another child cries because they miss their parents. Yet, the child carrying the tray has not moved their gaze from their work until successfully placing the tray on the table. They do this gently enough for the pitchers not to fall over. What has motivated this sweet child to remain focused and give their entire energy to carrying the tray? The answer is intrinsic motivation in the classroom, which starts with the smallest tasks and leads to bigger tasks.

Maria Montessori observed that children have individual and natural needs, which stem from their specific level of development. Through self-directed use of concrete materials, the fulfillment of their need guides the child to learn from what they hold within – this is called ‘self-directed learning.’ Self-discovery of knowledge empowers the child to have ownership of their learning.  Self-directed learning leads to a sense of fulfillment, self-confidence, and intrinsic motivation; thus, driving the child to explore more. This self-discovered knowledge holds an exponential force so powerful that a teacher in the classroom is referred to as a “guide” (labeled initially as “directress” by Maria Montessori) because she is merely an invisible being leading the child to their discoveries and learning. “This greatest sign of success for a teacher is to be able to say the children are working as if I did not exist” (Montessori).

Many studies on learning are finally catching up to Montessori’s study more than a hundred years ago. For example, in a study by Lepper et al. (1997), researchers investigated the effects of intrinsic motivation on a developmental perspective. They stated that intrinsic motivation in children decreases as they grow older. These studies centered on “differences in attitudes toward, and satisfaction with, school between children in elementary and children in the middle school year.” The study concluded that a child’s motivation to come to school and learn decreases as the child gets older. This was because the intrinsic motivation to learn had been replaced by extrinsic motivation. “One theoretically obvious possibility, stemming directly from previous literature in this area, is that the heavy use of extrinsic incentives and constraints in schools these days may result, over time, in the progressive undermining of children’s intrinsic interest in the subjects they study in school” (Lepper et al., 1997).

The study focuses primarily on traditional schools, not Montessori schools. “Montessori children do schoolwork and behave positively apparently because they are internally motivated. In contrast, traditional schools are steeped in extrinsic incentives to get children to learn and to behave well” (Lillard, 2005). The notion of Montessori cultivating an intrinsic environment is described in the article, as follows. “This form of education supports the popular notion that intrinsic motivation is best developed in classrooms which incorporate autonomy, mastery, and purpose. It also supports the view that extrinsic motivation is a thing of the past and does not belong in the elementary classroom” (Fitch, 2013).

Traditional V.S Montessori Approach to Intrinsic Motivation in the Classroom

Through her research from other studies, she states four fundamental comparisons between traditional and Montessori classrooms regarding intrinsic motivation.

Intrinsic Motivation Examples In The Classroom

In today’s world, knowledge is at the touch of a finger or voice command. As a result, young children have greater access to ‘passed down’ information, or passive learning. Just as with conventional education, where inquiry-based learning is the exception and not the norm, children rely upon memory or rote-based learning.  This type of learning is one-dimensional and limits the child’s joy of learning. For example, it is easy to say, “Hey Google, what is the capital of Cambodia?” and get an immediate answer.  Yet, for a child submerged in map study, with books, maps, pictures, music, and concrete materials, the child identifies the capital of Cambodia. Still, they can also identify the flag and more fully understand the country’s culture and history.

Passive learning and rote memory are outdated. Instead, children deserve the opportunity to learn by doing, to learn in a way that retains their tenacious curiosity, builds self-confidence, and their inner desire to learn.  Only then will education truly prepare a child for our future world, where they can think outside of the box, develop time-management and emotional intelligence skills, and become self-fulfilled members of society.